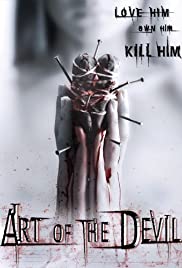 Art of the Devil (2004) is the first of a trilogy of horror films from Thailand.  This film is one of the many Thai horror films that made a splash in the early ‘00s including Ghost of Mae Nak (2005), Omen (2003), Diary (2006), Shutter (2004), and Re-Cycle (2006), to name a few.  The story concerns a young pregnant woman by the name of Boom (Supakson Chaimongkol) who is spurned by her lover who is a married man.  She goes to a witch doctor that uses black magic against her lover and his family.  After they mysteriously die, a new family moves into their place and Boom is left with a new outlet for her rage until the films climatic ending.

Being one of the earlier Thai horror films of the ‘00s, this film lacks the refinement of such films as Diary and Re-Cycle not to mention that of Shutter which was released in the same year.  The horror is pretty straight forward as directed by Tanit Jitnukul, his first horror film after a string of action and adventure films.

The cast also includes Arisa Wills, Krongthong Rachatawan, Tin Settachoke, and Somchai Satuthum, to name a few and is written by Ghost Gypsy.  If you enjoy Thai horror films then this is a decent time waster (especially if you decide to sit down and make it a triple feature of the entire franchise) but leaves you wanting more since the gore is pretty basic and the performances are all over the place.