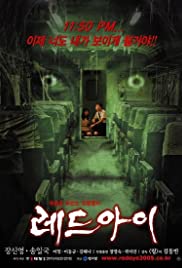 From South Korea comes the haunting thriller Red Eye (2005) from director Dong-bin Kim, who directed The Ring Virus (1999) and The Sleepless (2012).  In this haunting ghost film Mi-sun (Shin-yeong Jang) is a new railroad attendant who is working the night shift when on an overnight trip through Korea she starts having strange feelings and soon she starts seeing things and people who can’t possibly be there.  When she starts to investigate she learns that the train she is on was involved in a horrible crash sixteen years ago in which 100 people were killed.  Now, as the night looms on Mi-sun must discover the truth about what happened sixteen years ago as well as what is happening on her train now before it reaches its final destination of the night.

For fans of haunted and ghost films this film may be a little too tame as it relies more on drama than actual thrills and suspense.  It is not a film designed to scare audiences directly but it is designed to create mood and atmosphere especially considering the single location.  Dong-bin does an excellent job with the cast as they all give equally captivating performances but sometimes I feel as though they didn’t have much to do as the second act seems too long.  It is in the third act that the film really hits its stride so if you can handle the long journey, the payoff will come.

For those who have already seen too many haunted/ghost films in this ‘00s cycle then there is little here that will be of interest.