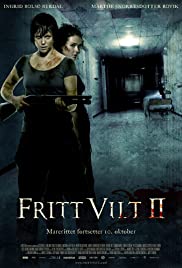 Being a huge fan of the original film I was very much looking forward to seeing Cold Prey 2 (2008) a horror film from Norway that really feels like one of the best slasher films from America.  Screenplay by Thomas Moldestad (with Story by credit to include Martin Sundland and Roar Uthang) and directed by Mats Stenberg this film takes place directly after the events of the previous film where we find our lone survivor Jannicke (Ingrid Bolso Berdal) making her way back to civilization and being saved by Ole (Kim Arne Hagan) who takes her back to the local hospital where we meet nurse Camille (Marthe Snorresdotter Rovik), whom also happens to be romantically involved with Ole.    Jannicke tells the police what happened to her and her friends and while she recuperates in the hospital, the police send a team to search for the bodies of her friends and the man that killed them.

The police return to the hospital with the bodies of her friends and that of the man who tried to kill Jannicke.  Unbeknownst to all of them, the man isn’t quite dead yet and when he is fully revived he sets his sights on killing everyone in the hospital in order to get back to his own home.  Jannicke, on the other hands, sets out to finish what she started which is to kill the man and avenge her friends at any cost.  What happens next is a cat and mouse chase throughout the hospital corridors where no one is safe and there are no safe places to hide.

This film takes a page out of Halloween II (1981) by taking place almost exclusively in the hospital and having the police delve deeper into whom the man is and what is his history which actually makes for some interesting backstory.  This being said, there is still plenty of mayhem to be had in this film just like what was in the original film which will not disappoint audiences.  This is a much bigger canvas for the film to expand on and a great film to showcase the rising talent of Berdal who is the equivalent of Norway’s Jamie Lee Curtis.  You will not come away disappointed!