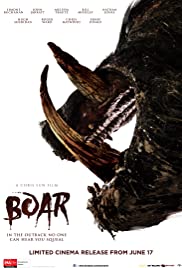 Bill Moseley (of Texas Chainsaw Massacre 2, The Devil’s Rejects) stars as Bruce who takes his family into the Australian outback to visit family in the film Boar (2018).  The Australian outback has never been as dangerous when there is a blood-thirsty giant boar on the loose killing everything that comes in its path but especially humans.

Written & directed by Chris Sun (with Kirsty Dallas as Story Editor) this is the giant killer boar film that horror fans didn’t know they wanted.  The gore is plentiful and you will shocked at just how well the creature FX are and there is a sense that anyone can die in this film at any time.  Also, Nathan Jones makes an appearance as a relative of Bruce’s and steals every scene he’s in.

This is a fast and entertaining thrill ride from beginning to end with some suspenseful and amazing cinematography that captures the atmosphere and location while also lending itself wonderfully to the horror film.  If you’re looking for a fun and entertaining ride in the Australian outback then this is your film.