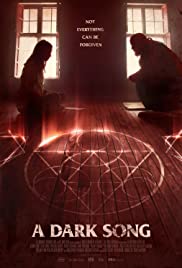 A Dark Song (2016) is the debut feature from writer/director Liam Gavin after having directed several short films and it is a marvelous feat that unfolds.  It is the story of Sophia (  She enlists the aid of an occultist by the name of Joseph Solomon (Steve Oram) to help her conjure up a supernatural entity rumored to grant her a single wish.  But to delve into such occult and dark magic you have to be willing to risk your mind, body and soul in an elaborate and time consuming ritual that once started cannot be stopped.  Sophia will have to go through the hardest ordeal in her life which will leave her scarred mentally, physically, and spiritually.
Catherine Walker) a woman desperate and with a deep and dark secret.

Gavin has crafted a tense psychological thriller that hinges on the performances of its two leads who both do an amazing in the film.  I wasn’t expecting much from the film as I had heard nothing about it and had no expectation.  It was one of those rare blind buys as I saw it in the store, liked the cover, and then read the back and decided to purchase it.  It was completely worth it as Gavin shows that he’s a filmmaker to look out for both as a writer and director.  He has a unique vision that could go a long way in the horror genre as he has something to say that horror fans will enjoy.  I, for one, am definitely looking forward to what he decides to do next.