Three American tourists venture to Japan for vacation when they come across a map and diary to a secret temple in the film TEMPLE (2017).  The set up is pretty basic with Kate (Natalia Warner) taking her boyfriend James and best friend Christopher (Brandon Sklenar and Logan Huffman, respectfully) on a trip to hopefully get Christopher to reconnect with the world.  Since Christopher speaks Japanese, he’s the best person to help them all navigate through an unfamiliar country. 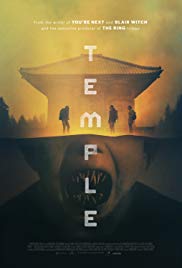 When they come across an ancient diary detailing an exotic temple the three decide to go on an adventure.  It’s a short trip away but it is far from civilization and anything they’re ever known.  When they get to the temple, they realize that they are not alone and that spirits of the dead prevent them from leaving the temple twisting their minds and what they believe to be real.  Their hope to survive the night continues to fade as one by one they become consumed by that which inhabits the temple.

Although the story is pretty derivative, the actors do a really good job of bringing life to their characters and to the film itself.  You’ll get more nuance to the characters than is typical of these types of films.  The script is written by Michael Barrentt (who also directs) and the story is by Neal Edelstein, Shinya Egawa, and Mike Macari.  If you enjoy the slow burn then you might enjoy this film but if you’ve already had your fare share of ghost stories (with haunted locations) then you can skip this film as even though it is well made it doesn’t really offer anything that you haven’t seen before.