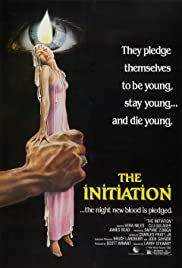 You will be forgiven if you’ve never heard of the ‘80s horror film The Initiation (1984) as it borrows a lot from many other films including  Alone in the Dark (1982) and Hell Night (1981), to name a few not to mention the fact that elements were better utilized in Chopping Mall (1986) which be released a few years later and become a huge cult classic with horror fans.  This being said, The Initiation is the story of Kelly Fairchild (Daphne Zuniga) a college student in the middle of pledge week who gets tasked with getting the keys for her father’s department store in order for her Sorority sisters to get in for a prank.  Everything goes as planned except that Kelly and her friends get trapped in the store with a deranged killer that has also found his way into the store.  Now Kelly must find a way out of the department store before she becomes the next victim of the night.

Written by Charles Pratt Jr. the film comes off as a product of the ‘80s horror film craze and does a great job of it.  Directed by Larry Stewart the film looks great and horror fans will enjoy all the gore on display.  It’s also a great introduction for audiences to actress Zuniga who would go on to star in such films as Spaceballs (1987),  The Fly II (1989), Gross Anatomy (1989),  and star in Melrose Place (which Pratt was a writer for).

The Initiation is not one of the best ‘80s horror films but it does hold up fairly well.  There just so happened to be too many ‘80s slasher films and this is one of the ones that was over looked and forgotten over time but it’s worth a look for the curious.