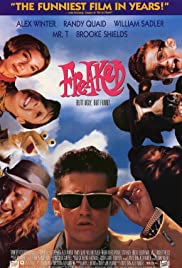 Actor Alex Winter is best known for his work in The Lost Boys (1987) and the two Bill & Ted films so most people don’t realized that he’s also a writer and director.  After writing and directing several short films he and Tom Stern co-directed the oddity Freaked (1993).  Winter stars as Ricky Coogan, a famous child actor down on his luck who is now prompted to be the spokesperson for a toxic waste company in South America.  With his most trusted friend Ernie (Michael Stoyanov) and activist Julie (Megan Ward), Ricky finds himself at the laboratory of Elijah Skuggs (Randy Quaid) who has been using the toxic waste to create and experiment on people whom unwillingly show up at his property.  Ricky, Ernie, and Julie soon find themselves Skuggs next freaks in his crazy menagerie of toxic created monstrosities that are kept in a barn out of public view.

Refusing to bow down to Skuggs rules and live the remainder of his life as a victim of Skuggs’ cruel experiments, Ricky hatches a plan to get all of his fellow freaks together to return them to normal and escape from Skuggs’ laboratory.

Winter also writes with Stren and Tim Burns this odd comedy that’s similar in tone to his Bill & Ted films.  The film was ignored upon initial release but has garnered a huge cult following due to the unusual story and eccentric cast of characters played by such names as Mr. T, Bobcat Goldthwait, Brook Shields, and William Sadler, to name a few.  The makeup effects are quite good for the time although heavy stylized for the this type of film.

Freaked is not a film for everyone as it is a product of its time with commentary on toxic waste usage and teen stardom but for people who love The Toxic Avenger this film is right up your alley.