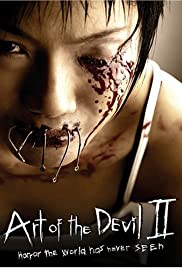 Art of the Devil II (2005) has nothing to do with the previous film other than it having black magic contained within.  In this film Elementary School teacher Aajaan Panor (Napakpapha Nakprasitte) becomes the infatuation of every man in the village.  These men place a love spell on her but that many love spells is too many for her to handle so she seeks the advice of an Indian witch doctor who prescribes her a diet of human flesh which drives her even deeper into the darkness.  Two years later, six of her former students reunite after the apparent suicide of one of their father, who was really killed by Panor.  This set off a chain of events where Panor needs to eat the flesh of the students if she has any hope of gaining her sanity back and overcoming the curse.

The film is directed by an entire battalion of people – Pasith Buranajan, Krongkiat Khomsiri, Isara Nadee, Seree Phonguithi, Yosapong Saisikaew, and Art Thamthrakul, and it shows as the film is overly long and meanders quite a bit.  This being said it does look immensely better than the previous film especially in terms of cinematography but the film is ultimately hampered by mediocre acting.  The gore effects are immensely better than the previous film and at times more effective.

For fans of Thai horror films you can do worse than this film and it is, point of fact, more interesting and entertaining than the previous film in the series.