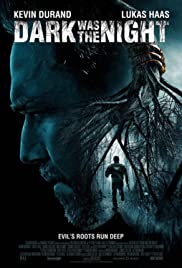 I love a good monster movie and when its well-executed with a good cast that makes the film even better which is what you get in the film Dark Was the Night (2014).  Kevin Durand (of TV’s The Strain and Lost) stars as Sheriff Paul Shields whose small town of Maiden Woods is suddenly assaulted by strange and unusual cattle and animal deaths that start to pop up.  When people start to disappear, Shields and his deputy Donny Saunders (Lukas Haas) starts to investigate but soon start to believe that an old Native American legend about what lives in the woods may be the culprit.

Their investigation leads to a logging company that has been taking up residence North of their town but may be the cause of pushing an ancient predator closer to civilization in search of food.  Shields soon comes to the realization that the creature assaulting his town may now have acquired a taste for human flesh and he and Saunders must find a way to save the people of Maiden Woods before everyone is left of the creature’s menu.

The film itself may take a little time to get to the real action as it presents all its characters with deep psychological trauma that makes for interesting characters and character interactions but it is definitely worth the wait as when the monster kills, it really kills.  If there is any really problem it might be that the CGI for after when the monster is finally revealed may not live up to audience expectation (sometimes less is really more).  This being said, the film is actually quite good and will satisfy most horror fans due to the strong writing from Tyler Hisel and direction from Jack Heller.