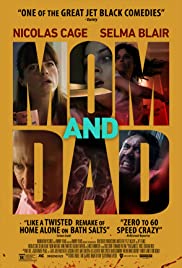 Brian Taylor writes and directs the Mom and Dad (2018) a film that answers the question of what would Nicolas Cage do if given free range to go totally off the rails?  Cage stars as Brent who is a man whose life has stalled.  He has a lovely wife Kendall (Selma Blair) and a daughter Carly (Anne Winters) and son Josh (Zachary Arthur) whom all undermines him.  When for no reason all grown-ups start to murder their children, Carly and Josh must band together to stop their parents from killing them while trapped in their own house.

Taylor does a lot with a little as the majority of the film takes place in the family home but he gets a lot of mileage out of the film even when he uses flashbacks to show the family before the total breakdown.  The film allows Cage and Blair to be at their most maniacal as they will stop at nothing to kill their own children while their children use everything at their means to save themselves.

This could have easily been a throwaway film had Taylor not gone the distance to show the parents before they turn homicidal.  The flashbacks show that Brent and Kendall have a marriage filled with problems where they can’t seem to agree on anything but surprisingly through the events of the film they come together for a singular goal…unfortunately, it’s to kill their children.  The overall concept is interesting and quite entertaining as you see parents throughout the film killing their children (or at least trying) which makes for some very funny moments.

Even with its serious undertones it’s an amazing engaging and funny film.