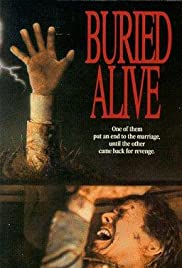 The telefilm Buried Alive (1990) is directed by Frank Darabont who would later craft The Shawshank Redemption (1994), The Green Mile (1999), and The Mist (2007), not to mention bringing to AMC the hit television series The Walking Dead.  This just so happens to be Darabont’s debut feature film after having directed the Stephen King based short story The Woman in the Room (1984).  This being said, this is not the type of film you might be expecting from Darabont.
Clint Goodman (Tim Matheson) is happily married to Joanna (Jennifer Jason Leigh), who unbeknownst to him is having an affair with Cortland Van Owen (William Atherton).  It seems that Joanna has had a tough time adjusting to her new life in the country and wants to stop the charade with her husband.   Cortland has hatched a plan that would allow them to get away from it all as long as they murder Clint to collect the insurance money.  Joanna thinks she kills Clint but only puts him in a deep coma.  After he is buried alive Joanna and Cortland think they have it made only Clint has managed to awaken from his coma and dug himself out of his own grave.  Realizing that his wife has masqueraded his death, Clint decides to hatch an elaborate plan to get even with his wife and her lover.

Although very much a product of “90s TV movies the film relies on the performances of its three leads which is where Matheson excels.  He starts off as your typical small town architect whom everyone loves and slows descends into vengeful madman due to his wife’s infidelity.  It is to Darabont’s assured direction that you get to see the slow metamorphosis of Clint and you believe that his reaction is the most logical one.

The film is hampered by it being a TV film but the build up to the ending is totally worth the wait and it shows the skill in film making that would aid Darabont in his future films.  This is definitely an older film to look out for as it possesses a lot of great elements that will still entertain to this day.