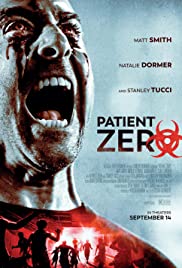 At first, the zombie film Patient Zero (2018) may seem like a knock-off of George A. Romero’s Day of the Dead (1985) but that is just the surface.  Sometime in the near future what’s left of humanity hides away in a military bunker away from the infected that have taken over the world above ground.  Dr. Gina Rose (Natalie Dormer) uses soldier Morgan (Matt Smith) to communicate with the infected since he is the only one that can.  It seems that after being bit by one of the infected, instead of being turned into an infected Morgan is now able to communicate with the infected.  Morgan is the only person of his kind and working with Rose, they try to discover who is the original person who caused the infection or as they like to call him – “patient zero.”  Unfortunately, this requires the use of Knox (Clive Standen) and all his military men to continue collecting the infected so that Morgan and Rose and interrogate them into revealing this info.  Knox would rather shoot to kill the infected as he loses good men every time he brings more of the infected into their bunker.  When one the infected called The Professor (Stanley Tucci) allows himself to get caught, Morgan must figure out how the infected are evolving while also figure out what The Professor is up to before it too late.

Written by Mike Le, Patient Zero is smart and calculated new take on an old idea that works extremely well as it takes many of the zombie/infected tropes and presents something new with them.  Stucci has never been so manipulative and evil as he is as The Professor who doesn’t even show up until halfway through the film.  Similar to Romero’s film, this film plays a lot with the tensions between the military and the scientists who are trying to find a cure with is handled in a new and creative way.  Both Smith and Dormer hold their own as the leads making this and enjoyable film from beginning to end.

Praise should also be handed to director Stefan Ruzowitzky who has crafted a suspenseful and tense zombie/infected film that doesn’t feel like just another zombie film despite the similarities to other films.  This is definitely one of the more interesting zombie/infected films to be released in the last few years.