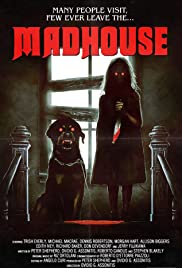 Madhouse (1981) is another one of those movies with an evil twin that saw no shortage in the ‘80s and ‘90s but this one happens to be one of the better ones.  In this film Julia Sullivan (Patricia Mickey) is a teacher of deaf children whose birthday is coming up.  Unfortunately, her disfigured and crazy sister who has been in a mental institution breaks out in order to crash her surprise birthday party.  There are elements of The Omen (1976) with the almost demonic dog in the film, as well as elements of Happy Birthday To Me (1981) but the film stands on its own with the strong performances from Mickey and the rest of the cast.

Writer/Director Ovidio G. Assonitis does a great job in creating atmosphere and suspense in what some would consider more a thriller than a straight slasher film but when people get killed, they really meet a gory demise especially in terms of the dog attacks.  Roberto D’Ettorro Piazzoli’s cinematography is amazing as he creates a character out of the location which creates a creepy atmosphere when there is little violence in the film.

For slasher and horror fans looking for a good ‘80s film that still holds up, Madhouse is one of those few.