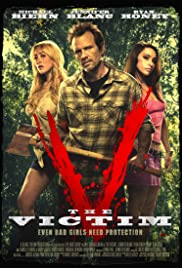 The Victim (2011) is writer/director Michael Biehn’s second feature film in this capacity after The Blood Bond (2011) which was released only a few months earlier in the year.  This is odd for the actor turned director best known for his films The Terminator (1984), Aliens (1986), Tombstone (1993), Navy Seals (1990), and The Abyss (1989), to name a few.  This film is a borderline crime-horror film.
Miehn is a loner who lives in a cabin in the middle of the woods by the name of Kyle Limato.  He keeps to himself and wants nothing to do with anyone else until a young woman Annie (Jennifer Blanc-Biehn) shows up on his doorstep one night asking for help.  It seems that Annie watched her best friend Mary (Danielle Harris) get killed by two crooked cops who now want to silence her.  Limato takes a liking to Annie and tries to help her figure out a way to deal with the cops before it is too late.

The film relies on flashbacks to tell the story which drags the film down.  Instead of enhancing the story the flashbacks stop the film in its tracks.  Although they go a long way in allowing Harris to get plenty of screen time, the flashbacks could have been better integrated into the overall film.

The film also suffers a bland script especially in terms of dialogue and performances all over the place.  The film feels like a throwback to the late ‘80s but without the gore to over compensate for the lack of originality in the material.  This is a shame since Biehn has been a part of some amazing films, this just isn’t one of them.