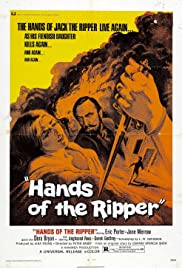 Hands of the Ripper (1971) is one of the many films having to do with the Jack the Ripper mythos only this is one produced by Hammer Studios!  In the film, as a young girl Anna (Angharad Rees) watches her father – the Real Jack the Ripper, kill her mother.  Years later as a young woman Anna begins to blackout and kill people as if she was in fact The Ripper.  Dr. Pritchard (Eric Porter) believes that he may be able to help her but he must first learn what triggers her blackouts and turns her in The Ripper before it is too late.

Although a somewhat derivative Ripper film, this film is classic Hammer Studio so it looks great and has some wonderful performances by the cast.  Written by Lewis Davidson (from an Original Story by Edward Spencer Shew) this is a wonderful film filled with extremely compelling characters despite being hampered by The Ripper mythos which I actually think they could have gone deeper into.  Director Peter Sasdy this is a very Gothic production with lavish sets and costumes as befitting other Hammer Studio productions.  Having directed such films as Countess Dracula (1971), Doomwatch (1972), and The Stone Tape (1971), to name a few, Sasdy is more than adept to handle the hands of the Ripper.

I’m sure that when the film was first released garnered more attention than I am giving it, but there have been so many films about The Ripper since then that this one holds little interest other than as a curiosity and for hard core Hammer fans.