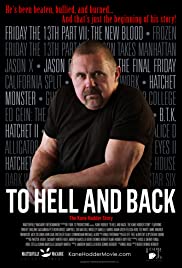 Documentaries that focused on a single individual can fall into two camps – one is that it’s too pretentious to actually say something serious about the subject or two it tells a well-rounded and comprehensive look at the subject’s life and career both the good and the bad.  Unfortunately, the second one only actually happens when the subject has already passed on.  So it is with great pleasure that To Hell and Back: The Kane Hodder Story (2017) belongs in the second type and Kodder is very much still alive.

For those of you who are not familiar of who Kane Hodder is (and I doubt there is a single horror fan who doesn’t know who he is), Hodder is a stunt actor/stunt coordinator/actor most famous most famous for playing the immortal Jason Voorhees in four of the Friday the 13th films as well as the character of Victory Crowley in the four Hatchet films (the forth film called simply Victor Crowley).  In addition to this Hodder has worked on a ton of films including Demolition Man (1993), House (1985), Se7en (1995), and Spawn (1997), to name a small few of the films.

In this film Hodder goes into intimate details about being a young child who was abused to an early accident where he was horrendously burned to his current recovery and insistent on always helping others.  This is reiterated by a huge cast of actors and fellow crew members who relate their stories of working with Hodder on very productions.  Some of the people featured included John Carl Buechler, Sean S. Cunningham, Bruce Campbell, Robert England, Adam Green, and Bill Moseley, with is just a small sampling of the people interviewed.

Directed by Derek Dennis Herbert, this could have easily been a talking heads documentary about Hodder but the stories these people tell show a brighter like on Hodder as a person and Hodder’s own recollections shed a light on how he overcame so many elements in his life that would have crippled other people.  This is not just a film about the man and his work but a film that gets into the deeper character of a man who has continuously faced challenges head on and never letting anyone or anything decide his own fate other than himself.

This is an amazing story of an amazing individual that has had a profound effect on the horror genre and horror fans in general and this is a great film that expertly separates the myth from the man.