Director Adam Green returns to his most famous creation in the third sequel in the Hatchet franchise Victor Crowley (2017).  Designed as a new chapter in the ongoing series since in this film Andrew (Parry Shen) takes center stage from the character of MaryBeth in the original Hatchet trilogy.  This is actually a great idea as it breathes new life in the franchise. 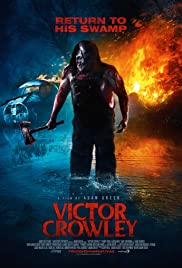 Years after the events of Hatchet III (2013), Andrew finds himself entangled in controversy whereas the greater public believes he was the true killer of the Hatchet murders.  Andrew is promoting his new book which tells the true story of what happened so that he can better clear his name…and make some money on the side.  Everything isn’t going as well as hoped and when his manager Kathleen (Felissa Rose) suggests that he return to the scene of the crime for a television show for a quick payday he jumps at the opportunity.  Misfortune hits them even harder when the plane carrying Andrew and the team of television host and crew crash lands in Victor Crowley’s (Kane Hodder) swamp.  Also, unbeknownst to Parry is that an independent film crew are also in the swap wanting to produce an indie film about the Hatchet murders; when they unknowingly resurrect Victor Crowley from his watery grave Parry and the television crew and the indie film crew find themselves trapped in Crowley’s swamp whom will stop at nothing at killing each and every one of them.

Despite being a fan of the original film, I wasn’t as big a fan of the first two sequels but that doesn’t mean that they weren’t just as entertaining and gory as anything being produced at the time.  Most of the actual story was in the original film and therefore there was little else to explore in the sequels.  This film is a completely different animal as it is fully aware of the horror fan culture with the addition of swamp tours and Victor Crowley souvenirs that can be purchased by tourists.  The addition of Crowley’s resurrection spell being available on You Tube as well as the “talk show” references to the television crew and Blair Witch Project indie film crew references give this film a lot of material to mine and riff at which makes this film infinitely more engaging and entertaining.  There are just so many great moments in the script that it would take forever to name them all but just let me tell you that this film was made by and designed for by horror fans.  The only real downside is that Crowley becomes nothing more than a force of mayhem and destruction with little time spent on developing his character any more than what we’ve already gotten in previous films but there is just as much gore and utter destruction in this film as in previous films which will satisfy horror fans.

One of the interesting aspects to this film is that it was filmed completely in secrecy and unveiled as a surprise to audiences.  When you view the film, you’’ll realize that most of it takes place in a single location (the crashed airplane) which makes for an interesting homage to Night of the Living Dead, where a group of people are trapped in a single location against a great evil outside the doors.  The film looks great (as usual) but the self-referential references set this film apart from the previous sequels.  This film also has a healthy amount of humor and as also Hodder provides some amazing physical and makeup FX.  This is a great addition to the Hatchet franchise and it opens the world up to different approaches in further sequels.