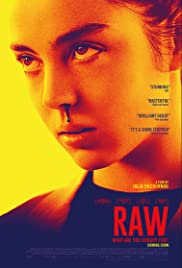 Cannibal films don’t get as subversive as the French horror film Raw (2016), a new look at cannibalism from the mind of writer/director Julia Ducournau.  Garance Marillier is Justine, a first year freshmen at one of the very best Vet schools in the world.  It also just so happens to be where her older sister Alexia (Ella Rumpf) is also enrolled as it is in the family business which includes the fact that Justine and her whole family are vegetarians.  When Justine gets to school her and her fellow freshmen are subject to hazing which includes eating rabbit livers.  At first, the eating of meat causes her to have and allergic reaction but then she starts to have uncontrollable cravings for meat.

Everything changes when she has the taste of human flesh and then her world is turned upside down.  It is only her sister Alexia that can help her but will she accept guidance from a sister whom she’s had great animosity towards and can she really find a way to stop the cravings before they consume her?
Ducournau crafts a slow burn of a thriller in which you watch Justine’s transformation into cannibal and is her coming of age story as the cravings allow her to drop her guard and experience life like she never has before.

The film is definitely not for everyone as like many French horror films it goes dark and to extreme places that will put off most audiences but if you stick with it you will experience a film unlike any you have before and it will be totally worth it.  Both Marillier and Rumpf give astounding performances as sisters which is at the heart of the film.  This is amazing film that you won’t soon forget.