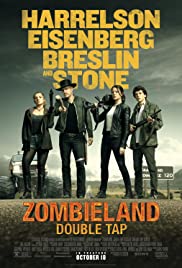 I must say that I wasn’t really a fan of the original film but I wanted to give the sequel a chance since I liked the concept of the overall film but didn’t care for the execution.  For me, Zombieland: Double Tap (2019) suffers from the same problems that the original film does so only fans of the original will find enjoyment in this film.  In the original film Zombieland (2009) director Ruben Fleischer crafts a funny and entertaining film with characters that do questionable things just because it’s funny and not because it makes any sense character wise or plot wise.  For the most part, audiences didn’t care that the plot of the film by the third act became more ludicrous and ridiculous to the point of absurdity as long as it was funny but it ended up destroying the strong female characters that needed to be saved by the dumber male characters whom throughout the entire film were being duped by the female characters.  This is a similar characteristic of the sequel as a genuinely good story is sidelined for the joke and the laughs.

In this film our survivors Tallahassee, Columbus, Wichita, and Little Rock (Woody Harrelson, Jesse Eisenberg, Emma Stone, and Abigail Breslin, respectfully) have been living the good life in the White House.  The only problem is that Columbus wants to marry Wichita and Little Rock needs some personal space between her and Tallahassee, who acts like her father, so Wichita and Little Rock hit the road in the middle of the night to make their own path in the world.  Tallahasse and Columbus try to make a new life for themselves without the girls until Wichita returns claiming that Little Rock ditched her for a man Berkeley (Avan Jogia).  Now the gang gets together for another cross country trip in search of Little Rock to bring her back home.  On their way they come across new and powerful zombies as well as other new characters to pay out the run time of the film which is virtually the exact same thing that happened in the original film.

A cross country trip with zombie madness and huge action sequences will appease most fans of the franchise as it is obvious that Fleischer got a bigger budget for this film but by the time the characters reach the third act where they all come together again in a community of non-violence where all weapons are melted down and it’s a party all the time you wonder how anyone in this community ever survived the apocalypse due to their stupidity.  There is the now required ludicrous zombie onslaught that occurs forcing the characters to be clever and come up with a way to kill the zombies without weapons.

On the surface, the film is quite entertaining and sometimes even funny (especially the scene where Tallahassee and Columbus meet their doubles in Albuquerque and Flagstaff) but the overall film suffers from an overall stupidity of characters doing dumb things just for the sake of the joke.  The action sequences are infinity better than in the original film and the cast is exceptionally good with a scene stealing performance by Rosario Dawson in the third act.    You’ll never be bored watching this film but it won’t leave an impression and if you think a little about it, everything seems to fall apart like the corpse of a zombie.