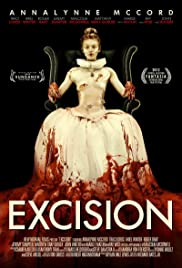 AnnaLynn McCord gives an amazing performance as the delusional high school student Pauline in the film Excision (2012).  Pauline has dreams and aspirations to be a medical student but her domineering mother Phyllis (Traci Lords) thinks she is completely delusional and should be more like her sister Grace (Ariel Winter), who has a medical condition that threatens her life.  Although Pauline is the older sister, it is Grace who helps her fit in with a world she doesn’t completely understand.  Phyllis is also on a mission to integrate her daughter Pauline into the regular world since she wants to understand why her daughter is so different from everyone else.  Pauline has other plans as she will stop at nothing to help her sister Grace whom she is indebted to and makes her dreams a reality.

In addition to McCord giving one of her best performances, Lords gives an equally amazing performance as her mother.  This film is in the same vein as May (2002), Roman (2006), Office Killer (1997),  Love Object (2003), and any other film about a misunderstood person whose live spirals out of control and leads to something tragic.

Written and directed by Richard Bates Jr. the film has an amazing look and the dream sequences look amazing.  Bates has crafted a film that will satisfy the horror fans and the people looking for a psychology thrill ride with deep characters.  A lot of the praise is placed on Bates but it is McCord and Lords who truly give the film weight as well as the performances of both their careers.