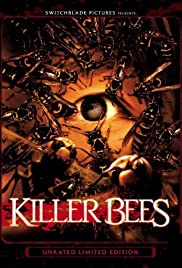 The Japanese horror film Killer Bees (2005) is pretty basic in its premise and execution as a group of young women with a single male chaperone embark on a camping trip in the woods and come across a strain of mutated killer bees.  When one of them is first taken ill, the chaperone and victim head out for help leaving the rest to (seemingly) enjoy the rest of the weekend.  By themselves the remaining women soon realize that there are more of the bees and soon find themselves assaulted and stalked by the bees.  They are split up and killed one by one as they try to find a way out of the woods and to safety.

Unfortunately, the CGI bees look horrible and the women all do little more than run and die one by one in a very slow manner.  It actually takes a long time for each of them to get bumped off as I’m thinking this is to pad the run time since there is little else in the way of plot for the film and the women are pretty much cliche and generic.

The film is written by Chiho Kawabata and Norihisa Yoshimura (who also directs) and comes off as an excuse to get a bunch of attractive young women in the woods in order to kill them one by one.  If the film concerned itself with anything else it may have actually been at least entertaining but instead the film is filled with annoyingly bland characters whom you want to see die but it just doesn’t happen soon enough and it’s not in the least bit exciting, in terms of gore (to appease the true horror fans).  A complete time waster for all those except actual fans of killer bee films.