I’ve never really gotten into French director Jean Rollin’s films as until now I’d only seen his Zombie Lake (1981) which I found atrocious.  I’ve wanted to see some of his more famous (or infamous) films so why not start off with one of his other zombie films which is one of my favorite genre of monster films?  The Grapes of Death (1978) is, thankfully, a vast improvement over Zombie Lake and a better intro into the world of Rollin’s films than other film. 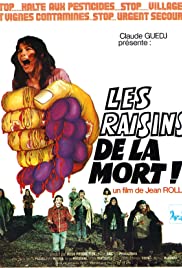 The story of the film is very straight forward when a young woman Elisabeth (Marie-Georges Pascal) and her friend are vacationing on a train when Elisabeth’s friend is assaulted by a strange man.  She flees the train and finds herself on a journey through the countryside where she encounters others like the person who killed her friend that have been exposed to something that is causing everyone to become blood thirsty zombie-like creatures.  Elisabeth tries her best to survive through the madness as she is hunted down and chased by everyone she encounters and those not exposed soon have their own agendas that may put her into even further danger.

Unlike Zombie Lake, this film has atmosphere and beautiful cinematography as well as copious amount of blood and gore.  The film is very much in the same vein as George A. Romero’s The Crazies (1973) and may have been inspired by it.  Despite the pretty one-note plot which is simply woman runs and get chased to location, then she leaves location and runs and gets chased to another location, and so on and so forth, the film gets more claustrophobic and more dangerous with each new turn of events.  It also raises the stakes and becomes gorier and more exciting until reaching the climax.

I will say that if I had seen this film before Zombie Lake I wouldn’t have waited over a decade before watching another Rollin film.  They may not be the best horror film but they have a charm and style of their own.