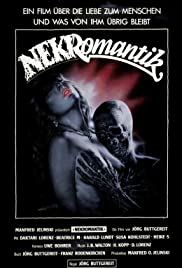 Writer/director Jorg Buttgereit has made a career of infamous and controversial horror films, so it is with great “pleasure” that I mention that I’ve finally decided to watch one of them starting with one of his most famous which is Nekromantic (1987), a hard to define erotic necrophilia filled psychology gore fest.  You are more than excused if this type of film is not something you’d be interested in nor was I at first but since it defies explanation and is on most hard-core horror fans must see list.  This being said, since I study horror films from all genres and all types I was bound to get around to this one.

In this film Rob (Daktari Lorenz) is a street sweeper who cleans up the roads after accidents most involving the grisly demise of someone.  He has a strange fetish in which he brings “spare” body parts home to his equally disturbed girlfriend Betty (Beatrice Manowski) but when he brings home the entire corpse of someone their relationship takes on a whole new level as the corpse becomes the third leg of their threesome.  At first this brings the two closer together but when Betty begins to grow closer to the corpse this threatens everything that Rob has put together.  When Betty decides that she no longer wants to share the corpse, Rob starts to descend into a darkness that he may not return from.

Buttgereit’s film is filled with disturbing images that will sit with you long after the film is over.  It is not an easy film to digest similar to that on the infamous Cannibal Holocaust (1980), which is also an acquired taste.  This is not to say that it doesn’t have its points of interest.  The black and white cinematography is quite good and it has that grunge look like Tetsuo: The Iron Man (1989).  This being said, I still can’t recommend this film to the “normal” horror fan but just those interested in investing in a film that borders on pornographic-gore-horror but those brave enough to take the plunge will come away a different person.