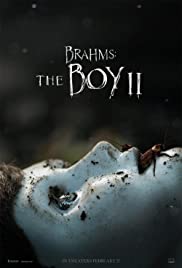 Director William Brent Bell returns to helm the unnecessary sequel Brahms: The Boy II (2020).  I say unnecessary as if you’ve seen the original film, then you know there is no need or logical place for a sequel to go, so writer   The original film was very much related in the “real” world but this sequel obviously goes into supernatural territory.
Stacey Menear decides to rewrite a lot of what made the original film such a great, yet surprising, film.

Liza (Katie Holmes) and her son Jude (Christopher Convey) are assaulted in their home while her husband Sean (Owain Yeoman) is away.  Suffering from stress from that night, Jude has stopped talking and Liza starts suffering from nightmares so they decide to uproot their family and move out to the country to heal.  Unbeknownst to them, they move into the cottage next to the one that featured in the original film.  When the family goes for a walk in the woods and venture to closely to that house, Jude finds the doll Brahms buried in the ground.  They also meet Joseph (Ralph Ineson), the groundskeeper, who tells them about some of the history involving the house.

Back at home, Liza begins to notice strange behavior in her son Jude.  She discovers Brahms “rules” and Jude starts to dress and act like Brahms.  She starts to question where Brahms came from and her investigation leads to a slew of murders and stories involving Brahm’s original home and its inhabitants to the point where she starts to think that maybe her son is possessed by the doll.  Now she must find a way to save her son before it is too late.

The first two-thirds of the film is actually not that bad.  Menear does a great job creating characters that actually have a captivating story that is rounded out by a great cast to bring it to life.  The film looks great and the atmosphere of dread permeates the film.  It is the fact that the film ultimately takes a supernatural turn in the third act that destroys the good will built up to that point.  The explanation for everything borders on ludicrous especially considering the original film.  The film would have been better served as an original stand-alone film rather than a sequel due to the baggage.  Keeping this in mind it’s anyone’s guess if you will ultimately enjoy the film although it may be better enjoyed by audiences who have never seen the original as which point the film should have just been called “Brahms”.