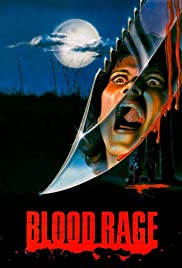 A product of the ‘80s, Blood Rage (1987) is one of those slasher films that you either love or your hate but if you saw it when it was released then you’re probably of the group that love it.  Having (finally) gotten around to seeing the film after years of hearing about it, I’m of the “indifferent” group in my opinion in regards to this film.

Twins Todd and Terry are so much alike except that one of them as a murderous fiend.  As a child Terry kills someone and frames his brother Todd who is put in an institution for ten years.  Terry in the meanwhile grows up a seemingly normal child and a jock beloved by his school peers but when Todd breaks out of the hospital on Thanksgiving Terry gets back into his murderous ways in order to cover up secrets…or just because he likes to kill people.

Mark Soper gets the chance to be two uniquely different characters as Todd and Terry which is the highlight of the film.  The kills are not all that creative but this is a derivative of ‘80s slasher films and by ’87 most audiences had seen everything and there were so many other films with better makeup FX.

Bruce Rubin does the best he can with the screenplay as does John Grissmer as director but the film lacks its own unique style that differentiates it from the other ‘80s slasher films which is why this film hasn’t reached greater status.  This remains a curiosity for slasher fans but pretty much for everyone else it’s just a highly forgettable film.