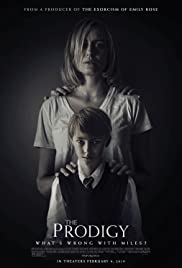 Sarah and John Blume (Taylor Schilling and Peter Mooney, respectfully) are about to be very happy new parents at the start of the film The Prodigy (2019).  Unfortunately for them, a serial killer is killed at the exact same time as their child is born.  As their son Miles (Jackson Robert Scott) grows order he starts to display strange and unusual behavior.  He not only grows up to be far more intelligent than most children but he also has a vile sense of violence that comes to a head when he assaults a fellow student.  Prompted by a specialist, Sarah begins that there is a supernatural reason for her son’s strange behavior which is solidified when he starts talking in his sleep in an another language.

Sarah learns that her son’s body may be inhabited by another spirit and she has a limited amount of time to get the spirit out of her son before her son’s spirit is gone for good.  The film is written by Jeff Buhler and directed by Nicholas McCarthy and they try really hard to present this old idea in new ways but it just simply lacks the drive of better thrillers.

Performances all around are actually quite good but the material itself just doesn’t break any new ground in terms of similar horror films and even with the R-rating the film lacks any real punch in terms of gore.  General audiences may not mind the ride as it is a solidly made film but horror fans may not feel up for the lack of any new ideas or something to say.