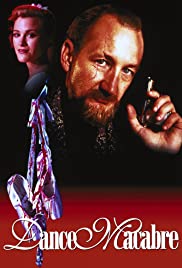 Even when he’s making bad movies he’s making good-bad movies as can be said for Robert England and his film Dance Macabre (1992), a kind of forgotten gem in which England plays Anthony Wager, a dance choreographer of a Russian ballet school.  When American dancer Jessica (Michelle Zeitlin) arrives at the school, Anthony immediately recognizes her resemblance to his former lover and takes a liking to her.  This doesn’t sit well with the Madame of the school (England in dual role) and before long Jessica’s classmates start to go missing.

Written and directed by Greydon Clark the film has a great look and England steals every scene he is in overshadowing Zeitlin completely (who comes off as miscast in this film).  Clark’s style would also be seen in the cult favorites Without Warning (1980), Wacko (1982), Uninvited (1987) and Out of Sight, Out of Mind (1990), to name a few.  He creates a dance a foreboding atmosphere playing homage to Dario Argento’s Suspiria (1977) in addition to England’s own Phantom of the Opera (1989), which is not surprising considering this film was originally conceived as a sequel to that film.

The film itself is quite forgettable but England does a great job with the material and he is always entertaining in just about everything he is in (no matter how bad).  Clark does his best to entertain while providing the elements that will appease horror fans but since the film hinges on Zeitlin, this is where the film falls apart the most as she is not nearly as good as the rest of the cast.