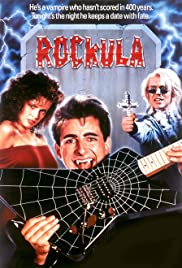 I’ve never been much of a fan of vampire films so when it comes to comedy-vampire films, I’ve seen very few.  I remember when Rockula (1990) came out but I just wasn’t interested even though I was a fan of actor Dean Cameron from the much better Summer School (1987) and Bad Dreams (1988), which preceded this film.   In this film Cameron plays Ralph, a centuries old virgin vampire who is cursed.  Once every century he meets the love of his life whom is re-incarnated and he has several days to try to save her before she is killed via a very elaborate prophesy.  This time he tries to avoid the curse but inevitably meets his love now in the form of Mona (Tawny Fere), who is a singer.  In order to get closer to her he becomes a rock star as well going by the nom de plum Rockula which allows him to embrace his vampire heritage.

For me, most of the comedy falls flat but there is charm in Cameron’s performance that was pulled over from his previous films.  This and the fact that the musical performances are actually quite good and entertaining (still to the day) makes this film an interesting time capsule for the ‘90s.

The film is written by Jefery Levy and Chris Ver Wiel and Luca Bercovici (who also directs).  Bercovici is better known for having directed the cult classic Ghoulies (1984) and The Granny (1995) but there is no reason why this film shouldn’t be included on his list of cult favorite films and maybe one day it will be.