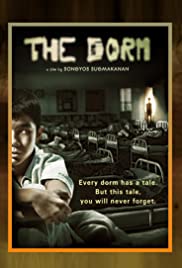 Ton Chatree (Charlie Trairat) is at an age where his father believes that he would better be suited at an all-boys boarding house for his continuing education and it would be better for the family in the Thai horror film Dorm (2006).  It is hard for Ton to adjust at the school as he is bullied by other boys and resents his father for sending him away.  Things get worse when the other boys scare Ton with ghost stories about the dorms which puts him unease.  When another young boy by the name of Vichien (Sirachurch Chienthaworn) befriends him, Ton believes that he just might be able to survive his new life.

When Ton really does start to see ghosts roaming the school, he soon realizes that Vichien may be connected in some way but will that interfere with their friendship?

Director Songyos Sugmakanan does a great job creating atmosphere and mood since the film lacks suspense.  As written by Sugmakanan and Vanridee Pongsittisak and Chonlada Tiaosuwan, this film comes off more as a drama with supernatural elements than a horror film.  This doesn’t mean that the film isn’t any good; in fact, the film is quite good as it tells the coming of age story of a young man forced to grow up in a world which just happens to have supernatural elements.  Keep this in mind and Dorm will be a film you thoroughly enjoy.