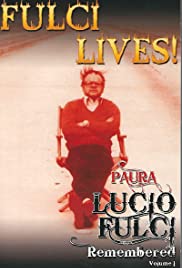 Directed by Mike Baronas Paura: Lucio Fulci Remembered Volume 1 (2008) is an amazing collection of interviews from cast and crew that have worked with the director Lucio Fulci.  The interviews encompass a wide variety of people whom both had a great working relationship with the eccentric director as well as those who found it difficult.  If you’re a fan of Fulci’s films then you’ll learn a lot from watching this film.

For those of you not in the know, Fulci is one of the most influential Italian horror film directors in the same vein as Mario Bava, Dario Argento, Ruggero Deodato, Joe D’Amato, Jesus Franco, and Umberto Lenzi, to name but a few.  Horror fans will easily recognize some of Fulci’s most famous films like Zombie (1979), The Beyond (1981), House By the Cemetery (1981), City of the Living Dead (1980), and Don’t Torture a Duckling (1972), to name a few.  His films have helped redefine the zombie genre in the same way that George A. Romero’s films have.  His films may not be for everyone as they are sometimes had excessive gore and sometimes too cryptic but they were never boring and always entertaining.  He graced every genre from Edgar Allan Poe adaption The Black Cat (1981), the crime-action film Contraband (1980), literary classic - White Fang (1973), comedy – The Eroticist (1972), and western – The Four of the Apocalypse (1975), just to name a few.

In this film, people from all these films and more are given the opportunity to express their thoughts about Fulci.  Fulci died in 1996 so this is a remarkable way in which people have been able to honor the late director and his legacy.  The film is not really designed to be enjoyed by the casual viewer or someone not associated with Fulci’s films; it will be better appreciated by fans of Fulci who have seen his films (or at least know of them).