Film Review: LOVE BEYOND THE GRAVE: A LOOK AT RETURN OF THE LIVING DEAD 3 (2011) 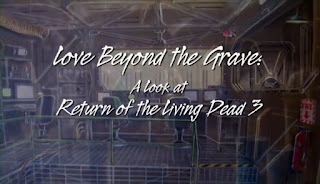 Although the actual film has aged a little over time (a product of ‘90s horror films) this documentary touches on the aspects that make this an endearing film in an ever growing franchise.  There are interviews with J. Trevor Edmond, Steve Johnson, Brian Peck, Brian Yuzna, John Penney, and Graham Henderson, to name a few.  Although not as comprehensive as the previous two documentaries in the series – More Brains! A Return to the Living Dead (2011) and They Won’t Stay Dead: A Look at Return of the Living Dead Part II (2011), this film still crafts an amazing behind the scenes look at this pivotal film in the franchise.

Fans of “making of” documentaries and this franchise will enjoy this look into this film.  It’s extremely well done and allows all participants to say their piece about the making of the film both the good and the bad which makes for an engaging and entertaining experience.