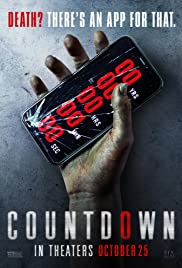 Justin Dec writes and directs the thriller Countdown (2019) which is a cautionary tale about the dangers of downloading random apps for you for cell phone simply out of curiosity.  Quinn Harris (Elizabeth Lail) and the rest of her fellow nurses decide to one day all download the latest app Countdown which is supposed to tell you when you are going to die.  It seems like a fun game at first until the people with a short lifespan start to really die.  Quinn soon thinks that there is supernatural force killing person when their time is up and if they break the contract that they signed when they downloaded the app, then death will come to them sooner.  Quinn must team up with Matt (Jordan Calloway) in order to figure out the mystery of the app and stop them from being the next victim.

The concept isn’t that bad but it’s the exact same as what Final Destination (2000) already did and much better.  The PG-13 rating hampers the film actually going the distance with the concept that is presented as most of the killings are off screen and by the time they reveal the overly CGI creature at the end, the film loses its way.  Countdown comes off as a tired old story with no new ideas over that it being about a cursed/haunted/demonic/etc. app and the supporting characters are barely developed for you to ever really care about their plight.

If you like this style of safe PG-13 fare than you might enjoy Countdown but for everyone else its not really worth your time.