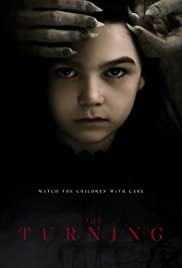 Henry James’ “The Turn of the Screw” gets an update in The Turning (2020) from director Floria Sigismundi.  Written by Carey and Chad Hayes the film tells the story of Kate Mandell (Mackenzie Davis) who needs a job and is hired to teach and take care of the young Flora Fairchild (Brooklyn Prince) in an elaborate estate.  When Flora’s older brother Miles (Finn Wolfhard) unexpectedly returns home, Kate finds herself taking care of both the children who harbor deep and dark secrets that slowly play on her fragile psyche.  Kate soon witness’s strange behavior in Miles as well as unusual occurrences on the estate that force her to ask the question of what is real and what is just in her head.

The film starts off well enough as a thriller with ghostly overtones.  Of particular interest is David Ungaro’s cinematography which creates a foreboding atmosphere to the estate creating a character all its own.  Davis also gives a great performance but neither Wolfhard nor Prince can hold their own as their performances are all over the place (whether they are playing the young children they are supposed to be or children possessed by ghosts) giving you the impression that they don’t know what type of film they are it.  The film also quickly falls apart as it tries to by ambitious and too cryptic to the material to absurdity and by the time you get to the final reveal you’ve completely given up on the film.

I love ambiguous films when they work for the story and/or characters but this film tries so hard being different and edgy due to the fact that it’s telling a story that’s been told plenty of times before that it misses the mark of actually telling a good and logical story.  It also lacks any real suspense or horror relying completely on mood and suspense which would be fine if it delivered on everything else but this is simply one of the biggest missed opportunities to come by in a long time and you’ll leave thinking it’s simply forgettable drivel.