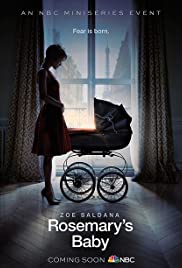 Agnieszka Holland directs the television remake of Rosemary’s Baby (2014) as a two-night four-hour event.  Holland does more than a capable job of handling the original novel from Ira Levin which was most famously brought to the screen by Roman Polanski in 1968.  Writing this version is Scott Abbott and James Wong and they’ve brought the story to the modern era with style and relevance.

Zoe Saldana plays Rosemary Woodhouse who has just experienced a miscarriage.  She and her husband Guy (Patrick J. Adams) are middle class citizens.  Guy suffers as a writer so he teaches as a university so that he has time to focus on his novel.  When her purse is stolen by a thief, she manages to catch the thief who happens to have been a habitual purse thief and she finds herself in possession with another woman’s purse.  When she returns the other woman’s purse, Rosemary meets Margaux Castevet (Carole Bouquet) a member of the elite class whom takes a liking to Rosemary and soon her husband.  Rosemary and Guy soon meet Margaux’s husband Roman (Jason Isaacs) and soon their lives are turned upside down.  The Castevet’s give them a new home completely furnished in their apartment building after a kitchen fire leaves Rosemary and Guy homeless.  Guy’s luck soon changes when he gets a better life at work and he soon gets his novel finished when he had previously been suffering from writer’s block.  And soon, Rosemary finds herself with child once again!  This would all seem great if Rosemary didn’t have suspicions that their good fortune comes at a cost which is usually other people dying.

The deeper Rosemary tries to discover the truth about the Castevets the more she discovers an elaborate ruse and she becomes to believe that the Castevets are part of o Satan worshiping cult that wants to kill her baby.  Rosemary will stop at nothing to protect her unborn child but the truth of what is going on won’t be fully revealed until after the baby is born.

Abbott and Wong craft a relevant and modern take on the material that actually works not only under the guise of a Satan worshiping cult (or as an secret cult society in general) but also with themes of class struggle and division and the motherly bond between mother and child.  The film also delivers the goods when it comes to the horror aspects as well but it is Holland’s assured direction that really allows this film to stand apart from Polanski’s original film.  This is one of the best remakes to come along and I suggest it to anyone who enjoyed the original.  There is enough contained in this version to fully be appreciated and there is no padding.  There was probably no real need for a remake but this version definitely makes a case for itself.  I would even be interested in Levin’s sequel novel “Son of Rosemary” to be made into a film as long as this same creative team is reunited.