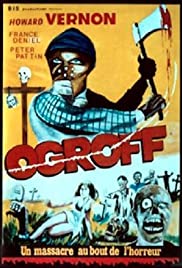 As bizarre early French horror goes, Mad Mutilator (1983) may be one of the most bizarre that I have ever seen.  Ogroff is a bestial and savage backwoods killer who pretty much kills every person he comes into contact with for no other reason other than they have come across his path.  Women, men, and children alike, they all are on equal footing when it comes to Ogroff.  There is no other plot to this film than that as there are no characters that the audience gets to know through the film.

The gore effects are sub-par as is pretty much everything on this low budget horror film.  For those of you with a curiosity for long forgotten foreign horror films than this film may appeal to you but for generally everyone else this is a completely unnecessary and useless film to even look for much less watch.