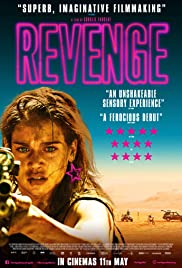 Coralie Fargeat writes and directs the recent film Revenge (2018) which sees Jen (Matilda Anna Ingrid Lutz) taking a vacation with her boyfriend Richard (Kevin Janssens) to a rich and secluded desert getaway for a week before his hunting trip.  It’s a beautiful palace in the middle of nowhere where you need a helicopter to get there (or some serious off road vehicles).  Everything is going as planned until Richard’s two hunting buddies show up at the house early surprising Richard and Jen, especially since Richard is married and Jen is supposed to be his secret mistress.    After a night of fun between them all, one of Richard’s friends rapes Jen while he is out getting hunting permits.

When Richard gets home he tries to settle the situation between his mistress Jen and his two best friends but things get out of hand and Jen goes on the run as Richard chooses to side with his friends.  When Jen falls off a cliff, Richard and his friends leave her for dead but Jen is far from dead and very resourceful.  When Richard decides that they need to clean up the mess they discover Jen’s body missing and they set out on a cross desert chase to clean up all lose ends.    With very little other than her wits, Jen must find a way to survive the elements of the desert while also trying to avoid detection from Richard and his men who are armed with guns and ready to kill her to keep their secrets.

Although this story is nothing you haven’t seen before Fargeat has crafted a very relevant film in the #MeToo era.  The film also hinges on Lutz’ performance which holds the find together especially in the final act that goes on for too long but still manages to captivate.  Also of note is the cinematography by Robrecht Heyvaert  which brings to life the mansion and the desert local to amazing life.  This alone elevates the film above other similar stories.  This is a film that is definitely worth a look!