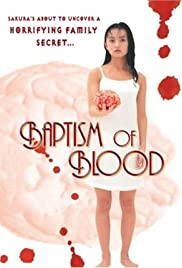 From Japan comes the disturbing Baptism of Blood (1996) which sees aging actress Matsuko (Lisa Akikawa) suddenly come down with a dis-figuration facial disease which prompts her to retire from the public.  Instead she pours all her attention into raising her daughter Sakura (Rie Imamura) only she rules her daughter’s life with an iron fist hidden away in her old and crumbling mansion.  When Sakura over hears her mother’s ghastly scheme to transplant her brain into her own, she must find a way to escape her mother before it is too late.

Based on the manga by famed horror writer Kazuo Umezu, the film is written and directed by Kenichi Yoshihara who does a great job translating the material to the big screen even though I think that he could have gone even a little further with Umezu’s style in translation.  This being said fans of Umezu’s manga will enjoy this adaptation.  It’s a shame that Yoshihara hasn’t directed anything else as from this film he has potential to really create something unique with his style (especially if it was more material from Umezu).

Although not a spectacular film, it has its charms and was a decent adaptation of Umezu’s work.  It will satisfy Umezu’s fans as many of the other adaptations have been hit or miss but even though this one plays it safe, it does a great job with the characters despite any other faults.