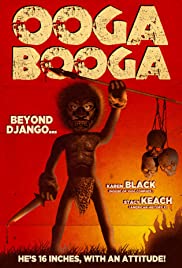 Charles Band directs the Full Moon Features production Ooga Booga (2013) which takes on police brutality and racism head on.  True to most Full Moon films, this film is overly blatant with its handling of controversial subject matters which is most of the charm of the studio’s most famous and entertaining films.  Ooga Booga is the story of Devin (Wade F. Wilson) who is given a doll dubbed the Ooga Booga from a co-worker trying to break into the action figure/doll toy line.  While at a convenience store he watches some Meth Heads rob and kill the store owner.  Devin comes out of hiding when the Meth Heads are gone and tries to save the store owner by calling the police.

When the police arrive, Officer White (Gregory Niebel) accuses Devin of the murder due to the fact that he is racist and needs a “black guy” to take the fall.  Officer White kills Devin in front of his partner and it all becomes “case closed” due to the fact that the Judge over the case (Stacy Keach) is also a racist.  Unbeknownst to them all, Devin’s spirit enters the Ooga Booga doll and he seeks out revenge for his death.  With the help of Donna (Ciarra Carter), Devin’s girlfriend, the Ooga Booga doll will cut a path of death from the Meth Heads up to the Judge until everyone responsible is held accountable.

If you are a fan of Full Moon Features then there will be a lot to like about the film as it follows the same path as most of their most well-known films.  For those not familiar with the Full Moon aesthetics then this will probably be seen as a complete and utter mess.  The Full Moon empire has crafted a unique style and genre of films for the B-movie fan and if you know that going in then their films can be quite entertaining in their absurdity.  This film is no different than their Head of the Family, Puppet Master, or Gindgerdead Man franchises.