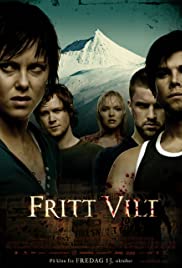 A weekend snowboarding trip between five friends turns deadly in Cold Prey (2006).  Jannicke (Ingroid Bolso Berdal) and her friends (Rolf Kristian Larsen, Thomas Alf Larsen, Viktoria Winge, and Hallvard Holmen) venture into the Norweigian mountains for a quiet vacation snowboarding when one of their members injures himself.  With no way to get him to a hospital in time they take refuge in an abandoned hotel until they can get to help.  They soon discover that the hotel isn’t as abandoned as they thought as they begin to be hunted one by one.

Director Roar Uthaug has crafted an exciting and engaging film that while it follows your typical slasher tropes is actually quite entertaining due to the cinematography and editing which creates suspense.  Most of the cast is very likable and the kills are very effective so horror fans will be very appeased.  Now this isn’t something you haven’t seen before (especially if you’re a fan of the Wrong Turn franchise) but the use of location and the cinematography do set this above your standard straight to DVD/Streaming fare.

It’s also of note that there are two sequels to this film as well (which I didn’t know before watching the film) and if they are as good as this film then that will make for one of the better franchises of films out there in this backwoods-killer genre.