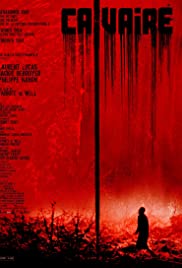 Marc Stevens (Laurent Lucas) is but a simple entertainer who is trying to get to his next gig when his car breaks down in the middle of nowhere and thus begins Calvaire (2004) or Marc’s ordeal.  In this French horror film Marc finds solace in the home of Bartel (Jackie Berroyer) who offers to help him fix his car so he can get on his way.  Warned not to stray too far close to town, Marc takes a walk to pass the time and inevitable comes himself in that very town except there are no women anywhere.  When Marc finds Bartel taking apart his car instead of fixing it he finds himself trapped by a man who believes he is his wife that walked out on him years earlier.  No Bartel will stop at nothing to keep Marc “his wife” with him and away from the rest of the townsfolk even if it means beating her/him into submission.

Part of the extreme new wave of French horror cinema that categorized the early ‘00s (other films include High Tension, Martyrs, La Horde, Inside, Ils, Sheitan, and Malefique, to name a few), Calvaire is not necessarily for everyone but it is a great film as director Fabrice du Welz (who also wrote the screenplay with Romain Protat).  The film is atmospheric and suspenseful due to the fact that Lucas is so good as the tortured Marc that you empathize with his situation and the terror that he is put in.  This film is definitely not for thus unfamiliar with French horror films but it is definitely one of the best that was produced during that decade.