Film Review: THEY WON’T STAY DEAD: A LOOK AT RETURN OF THE LIVING DEAD PART II (2011) 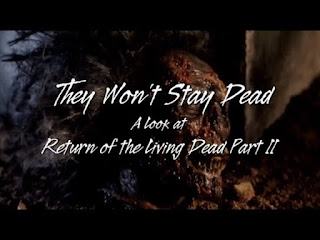 Whether or not you are a fan of Return of the Living Dead Part II (1988) there is no denying that They Won’t Stay Dead: A Look at Return of the Living Dead Part II (2011) is one of the most comprehensive documentaries on the making of the film.  At first you may not know why the film deserves such accolades but after viewing this documentary you will have a greater appreciation of how major films are made from the people who make them.

Most all the cast and crew are interviewed for this film but what is really an eye opener is how many people didn’t think there needed to be a sequel and what major problems the film faced while being made.  This being said the film itself has a cult audience and this documentary perfectly captures why it is both loathed by some and loved by others.

Just a quick side note.  I saw this film as a kid when it first came out in ’88 never realizing it was a sequel (I watched a lot of sequels before the original back in the ‘80s) and therefore it holds a different place for me than the original.  In ’85 when the original was released I was more a fan of Romero’s Day of the Dead but by ’88 my tastes had changed and I saw the sequel.  After seeing and enjoying the sequel, I then went back and viewed the original.

So, it is with great pleasure that I say that this documentary whether you are a fan of the original sequel or not is an eye opening experience when it comes to getting into the mind of the cast and crew in regards to the making of the film.