As a companion film to the previous film in the franchise Art of the Devil III (2008) sees Napakpapha Nakprasitte return as the vengeful Adjaan Panor, a school teacher cursed by black magic who must eat the flesh of the people who cursed her in order to alleviate that curse.  In this film, which sets itself up as a prequel to the events of the previous film Panor is a victim of a black magic priest who believes she possesses the “third eye” which will save him from himself being consumed by dark magic contained within himself.  If he cannot get the “third eye” from her his own life will end. 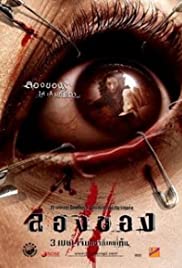 This film has the distinction of being the best looking of the entire franchise as both the cinematographer, locations, and CGI effects all are top notch even for a film based from Thailand.  This goes a long way with showcasing what is a retread of the first two films in the franchise, so general audiences may not find as much enjoyment in this film.

This being said, the film gives a much more grounded view in its depiction of black magic since one of the main characters is a practitioner and you see him directly use it in the film.  These films (and this franchise in general) is an acquired taste so for those who have seen the previous film then this is a nice film that ends the franchise but for all others it may be a complete waste of time.