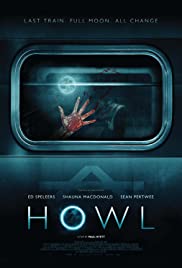 Screenwriters Mark Huckerby and Nick Ostler try to craft a new version of the werewolf tale in their film Howl (2015).  A train of passengers led in part by one of the ticket takers Joe (Ed Speleers) gets sidelined and their train is forced to stop in the middle of the night in the middle of nowhere.  With only a couple miles between them and their destination, the passengers of the train talk Joe into unlocking the outer doors and allowing them to walk the couple of miles to the next station after Joe realizes that the conductor is missing.  It’s not long before they all realize that there is something in the woods bent on killing them all and once they make their way back to the train, the train becomes their tomb as the creatures on the outside fight to get on the inside.

Joe must work with the eclectic group of passengers in order to find a way to get the train running again and get them all to safety but time is running out and the creatures outside will stop at nothing to get inside and the tensions among the passengers escalates as they all refuse to band together as one.

Howl looks great as directed by Paul Hyett but suffers from a lack of likable characters as most of the characters you want to see killed by the werewolf-like creatures in the film.  It’s no trick saying that they are not werewolves as the title of the film and the fact that once someone is bit they turn into one but they don’t really look like your typical werewolf and probably act like something more in line with the ones seen in Dog Soldiers or Underworld.  This being said the CGI for the creatures doesn’t really hold up and get overused when more of the creatures show up.  The film also has a problem in that there is way too much padding to the film and after the halfway mark the characters start making very dumb decisions which get annoying after a while.   This may deter most horror fans but if you’re looking for a decent werewolf time waster than you can do worse than this one.