In the future, a virus will cause people to act unlike themselves causing mass violence and disruption.  When this happens, the only thing to do is quarantine until the virus runs its course leaving everyone involved innocent of what happened during their deranged state.  This is the basis for the film Mayhem (2017) which sees Derek Cho (Steven Yeun) having a really bad day.  After being fired at his law firm for something he didn’t do, he and a woman he was supposed to help with a loan Melanie Cross (Samara Weaving) get quarantined in his building during an outbreak of the deadly virus.  Now as rage and violence erupts around them, Derek and Melanie must fight their way to the top of the building to Derek’s boss’ so he can reverse his firing and help Melanie as best he can but they have to get through hundreds of his fellow employees who want nothing more than to kill them. 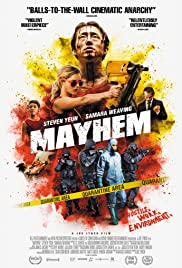 Yeun gives his most erratic and kinetic performance as a man determined but also on the verge of total insanity as the virus takes hold of him and he tries his best not to go totally nuts while all his fellow employees maim and murder everyone around them. Weaving equally holds her own as a woman who simply wanted an extension on her relative’s loan but when Yeun’s Derek refuses to give it to her in order to advance his career she tries whatever she can to get a reversal.  The two of them who were originally at odds with one another end up on the same side when Yuen believes the only way for both of them to get what they want is to go all the way up to management.

Written by Matias Caruso and directed by Joe Lynch this is a kinetic film filled with violence, mayhem, and total destruction which means that it is right up a horror fan’s avenue!  The film looks great especially in terms of the cinematography and editing but the film also satisfies because the characters actually have a goal and the film makes a point despite going to the extremes to present it.  This is a great showcase for Lynch and Yeun which just showcases just how much talent these two have and that future films are to be looked out for.