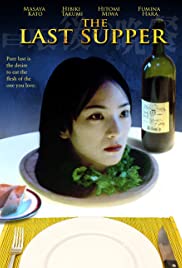 Based on the novel by Kei Oishi, The Last Supper (2005) is a psychological horror film in the vein of anything that you might find in a Hannibal Lector film…except on a much smaller budget.  This Japanese bargain basement production (with a budget of barely $400,000) tells the story of Dr. Yuji Kotorida (Masaya Kato) who is a renowned surgeon who also happens to kill and eat people.  When a co-worker asks him to provide the meat for her wedding, Kotorida sets about to craft the most exquisite meal anyone has ever set their eyes on.

Written and directed by Osamu Fukutani the film suffers from its low budget as it tries to straddle the fence between psychological thriller and gore film.  At times it suffers as it uses flashbacks to show how Kotorida got to where he was and if you’re into the slow burn then this film will be right up your alley.  If you are not, then a lot of the elements that I just described may have you turning off the remote before the end of the film but I have to say that the ending is definitely worth the buildup as it is something you won’t soon forget.

The film lacks refinement and is pretty sub-par when compared to any of the films in the Hannibal Lector franchise but those looking for something different and can look past the low budget may find an engaging film.