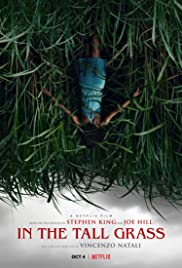 Writer/director Vincenzo Natali takes his first stab at Stephen King and Joe Hill material with the film In The Tall Grass (2019) for Netflix.  Siblings Becky and Cal (Laysla De Oliveira and Avery Whitted, respectfully) stop their car on a desolated road due to the fact that Becky is pregnant.  While on the side of the road they hear a call of a small child coming from the tall grass which adorns both sides of the road.  The voice claims to be lost in the tall grass and needs help so Becky and Cal enter into the tall grass to help.  But unbeknownst to them, getting back out of the tall grass proves problematic and once Cal and Becky separated from one another trying to find each other also becomes an even bigger problem.  As they wander through the tall grass Becky and Cal meet the small child Tobin (Will Buie Jr.) as well as his father Ross (Patrick Wilson), who has been “infected” with something that lies at the center of the tall grass.  It seems that fate has brought these two families together for something ancient and primal.

This is a concept that could have easily over stayed its welcome but Natali has crafted an engaging film with a talented cast that holds the premise together as it is presented in sections that progress logically from one section to the next introducing more characters while continuing to establish and elaborate on everything that came before.  I can’t reveal any more without revealing key plot points that are better left unrevealed.

I have yet to read the original King/Hill short story on which the film is based but I will assure horror fans that Natali has crafted a film that holds its own against other King adapted films.