Film Review: MORE BRAINS! A RETURN TO THE LIVING DEAD (2011) 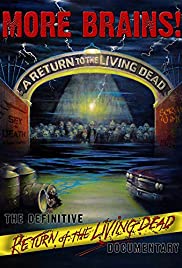 I know I’m going to be hated by a huge number of the horror film fans but Return of the Living Dead (1985) is not one of my favorite zombie films.  It has its moments but it’s never been a go to movie for me who is why I’m now going to say that I should probably go back and re-evaluate it based on my viewing of the documentary More Brains: A Return to the Living Dead (2011).

Director Bill Philputt has crafted one of the most engaging and comprehensive documentaries on one of the most celebrated zombie films ever made.  There is no denying the impact this film has had on the zombie and horror-comedy genre which is why it’s one of the most talked about films to this day.  People talk about Return of the Living Dead in the same way that they speak about John Landis’ An American Werewolf in London in that these are two of the rare occasions where horror and comedy were perfectly integrated.  The one reason why this film never stayed with me is because of this very same thing as unfortunately I was always a bigger fan of the nihilism of Romero’s Day of the Dead released the same year.

The documentary has an amazing list of people interviewed from the film from most of the main cast and crew (which includes Don Calfa, Clu Gulager, James Karen, Thom Mathews, Linnea Quigley, and John Russo, to name but a few).  The magic of the film is that these people have such fond memories of making the film that you can’t help but get caught up in the grandeur of it all.  Philputt has done an excellent job crafting an entertaining and engaging film that honors the film while also standing on its own separate from that film.  If you’re not a fan of Return of the Living Dead, this documentary will make you go back and re-evaluate it on your own.