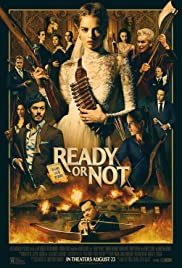 Family doesn’t get more sadistic than the one featured in the film Ready or Not (2019) from directors Matt Bettinelli-Olpin and Tyler Gillett.  Grace (Samara Weaving) just married Alex (Mark O’Brien) at the family estate and it is tradition that on their wedding night that the family must play a game in order for the new member to be inducted into the family as part of initiation.  Unfortunately for Grace, she picks the game “hide and seek” which at first seems harmless enough but while Grace is “hiding” the rest of Alex’ family which includes his mother and father, grandmother, siblings and their spouses, gather up weapons to maim and kill.  Grace soon discovers that she is part of a ritual sacrifice that the family members believe will ensure their hierarchical status in the outside world.

Grace must be sacrificed before sun up our all family members will die.  Unfortunately, for the family, Grace isn’t going to take it sitting down and she will arm himself and protect herself against anyone that gets in her way.

The film works as both a comedy and horror film in that the film can get graphic in its horror elements but it especially does a great job balancing the comedy both visually and through the characters and story as you never know whether the family members ever truly believe in the ritual they are doing or if they are just doing it out of tradition.  Bettinelli-Olpin and Gillett do an excellent playing against horror conventions and expectations to deliver a suspenseful and action packed film that engages and entertains audiences from beginning to end.

There are some especially amazing performances from Adam Brody, Henry Czerny, and Andie Macdowell, to name a few.  It is the performances that hold the film together and which sets this film apart from other horror films as the entire cast is shooting their A-Game.  This is a fun and exciting film that also audiences will enjoy from beginning to end.