Acclaimed cult director Richard Stanley tackles H.P. Lovecraft’s Color Out of Space (2019) which stars Nicolas Cage as Nathan Gardner who has moved his wife Theresa (Joely Richardson) and their two children (Madeleine Arthur and Brendan Meyer) to a country farm where he can raise Alpacas and she can work from home in her corporate job while recovering from an illness.  Nathan finds it hard to be a “farmer” while his wife is the true breadwinner of the household.  Neither of their kids enjoy living a solitary experience in the middle of nowhere forced to help their father. 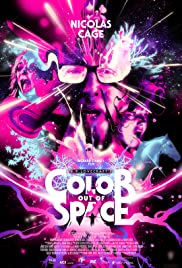 When a meteorite crashes in their front yard releases an extraterrestrial organism which slowly corrupts and transforms everything around, Nathan and his family must contend with the corruption of their familial bond while everything around them falls apart.  Not only does the extraterrestrial organism affect the surrounding area but it also changes Nathan and his family both psychologically and physically transforming their lives into a living nightmare.

Written by Stanley and Scarlett Amars, the screenplay does a great job presenting a family under pressure due to the rift between Nathan and his wife who doesn’t believe that the alpaca farm will work and neither does his children, so when the extraterrestrial influence arrives it heightens these concerns and fears to tragic circumstances.  The film doesn’t shy away from the hardcore horror aspects either.  Although there is a slow build up as we get to know all of the characters there is a huge payoff by the third act that proves that Stanley still knows how to craft a captivating and boundary pushing horror film even after the long hiatus (he hasn’t directed a narrative feature film in over  thirty years).

Of note also is the fact that this is one of the best films adapted from Lovecraft’s work so fans of the novelist will enjoy this film in addition to horror fans and even general audiences (if you can get passed the few graphic moments).  Stanley is still a talent to be on the lookout for and I hope it doesn’t take nearly as long before he releases his next feature.